You cannot make a plant grow in soil unsuited to it. A child teaches itself. But you can help it to go forward in its own way. What you can do is not of the positive nature, but of the negative. You can take away the obstacles, but knowledge comes out of its own nature. Loosen the soil a little, so that it may come out easily.

Put a hedge round it; see that it is not killed by anything, and there your work stops. You cannot do anything else. The rest is a manifestation from within its own nature. So with the education of a child; a child educates itself. You come to hear me, and when you go home, compare what you have learnt, and you will find you have thought out the same thing; I have only given it expression. I can never teach you anything: you will have to teach yourself, but I can help you perhaps in giving expression to that thought. (IV, 56) 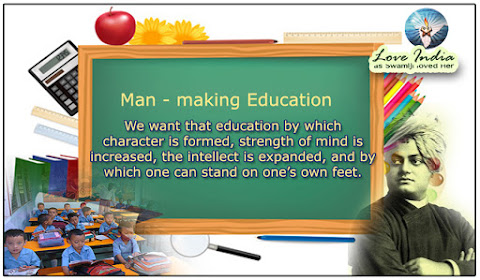 By education I do not mean the present system, but something in the line of positive teaching. Mere book-learning won’t do. We want that education by which character is formed, strength of mind is increased, the intellect is expanded, and by which one can stand on one’s own feet. (V, 342) 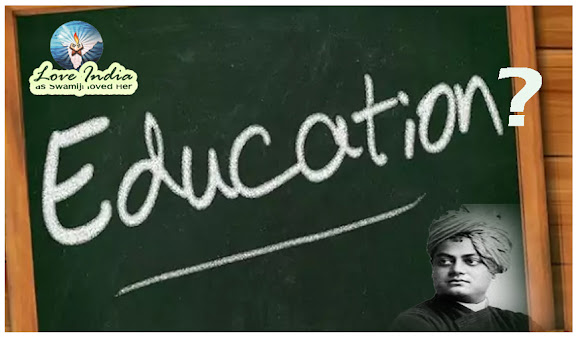 What is education? Is it book-learning? No. Is it diverse knowledge? Not even that. The training by which the current and expression of will are brought under control and become fruitful is called education. Now consider, is that education as a result of which the will, being continuously choked by force through generations, is well-nigh killed out; is that education under whose sway even the old ideas, let alone the new ones, are disappearing one by one; is that education which is slowly making man a machine?

It is more blessed, in my opinion, even to go wrong, impelled by one’s free will and intelligence than to be good as an automaton. Again, can that be called society which is formed by an aggregate of men who are like lumps of clay, like lifeless machines, like heaped up pebbles? How can such society fare well? Were good possible, then instead of being slaves for hundreds of years, we would have been the greatest nation on earth, and this soil of India, instead of being a mine of stupidity, would have been the eternal fountain-head of learning. (IV, 490)

The Reality and Shadow

All modern religions start with the idea,” continued the speaker, “that man was once pure, he fell, and will become pure again. I do not see where they get this idea. The seat of knowledge is the soul; external circumstance simply stimulates the soul; knowledge is the power of the soul. Century after century it has been manufacturing bodies. The various forms of incarnation are merely successive chapters of the story of the life of the soul.

We are constantly building our bodies. The whole universe is in a state of flux, of expansion and contraction, of change. Vedanta holds that the soul never changes in essence, but it is modified by Maya. Nature is God limited by mind. The evolution of nature is the modification of the soul. The soul in essence is the same in all forms of being. Its expression is modified by the body. This unity of soul, this common substance of humanity, is the basis of ethics and morality. In this sense all are one, and to hurt one’s brother is to hurt one’s Self. 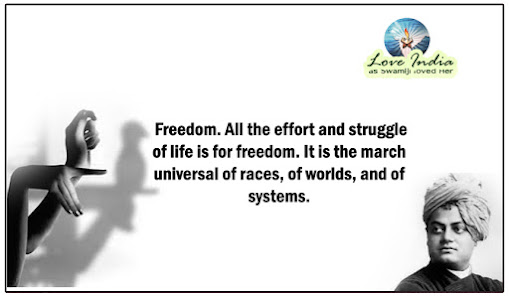 “Love is simply an expression of this infinite unity. Upon what dualistic system can you explain love? …..”What is it we all seek? Freedom. All the effort and struggle of life is for freedom. It is the march universal of races, of worlds, and of systems.

Individuality in universality is the plan of creation. Each cell has its part in bringing about consciousness. Man is individual and at the same time universal. It is while realising our individual nature that we realise even our national and universal nature. Each is an infinite circle whose centre is everywhere and circumference nowhere. By practice one can feel universal Self-hood which is the essence of Hinduism. He who sees in every being his own Self is a Pandita (sage).

Rishis are discoverers of spiritual laws.

In Advaitism, there is no Jivâtmâ; it is only a delusion. In Dvaitism, there is Jiva infinitely distinct from God. Both are true. One went to the fountain, another to the tank. Apparently we are all Dvaitists as far as our consciousness goes. But beyond? Beyond that we are Advaitists. In reality, this is the only truth. According to Advaitism, love every man as your own Self and not as your brother as in Christianity. Brotherhood should be superseded by universal Selfhood. Not universal brotherhood, but universal Selfhood is our motto. Advaitism may include also the “greatest happiness” theory. 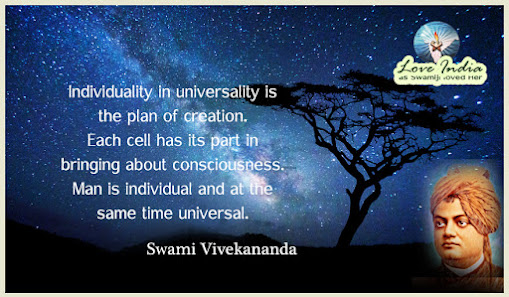 So’ham — I am He. Repeat the idea constantly, voluntarily at first; then it becomes automatic in practice. It percolates to the nerves. So this idea, by rote, by repetition, should be driven even into the nerves. (VI 121 – 122)

Swamiji provides us here with a very practical suggestion as to how to make the idea of the Divinity of the soul (soham) throb in our nerves so that our whole life  starts  vibrating to that  tune.

Cosmos and the Self

Every evolution is preceded by an involution. The whole of the tree is present in the seed, its cause. The whole of the human being is present in that one protoplasm. The whole of this universe is present in the cosmic fine universe. Everything is present in its cause, in its fine form. This evolution, or gradual unfolding of grosser and grosser forms, is true, but each case has been preceded by an involution. The whole of this universe must have been involute before it came out, and has unfolded itself in all these various forms to be involved again once more. Take, for instance, the life of a little plant. We find two things that make the plant a unity by itself — its growth and development, its decay and death. These make one unity the plant life. So, taking that plant life as only one link in the chain of life, we may take the whole series as one life, beginning in the protoplasm and ending in the most perfect man. Man is one link, and the various beasts, the lower animals, and plants are other links. Now go back to the source, the finest particles from which they started, and take the whole series as but one life, and you will find that every evolution here is the evolution of something which existed previously. 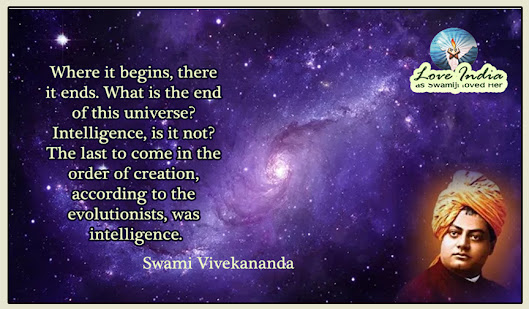 The Vedas, as the Hindus say, are eternal. We now understand what they mean by their being eternal, i.e. that the laws have neither beginning nor end, just as nature has neither beginning nor end. Earth after earth, system after system, will evolve, run for a certain time, and then dissolve back again into chaos; but the universe remains the same. Millions and millions of systems are being born, while millions are being destroyed.

The universe remains the same. The beginning and the end of time can be told as regards a certain planet; but as regards the universe, time has no meaning at all. So are the laws of nature, the physical laws, the mental laws, the spiritual laws. Without beginning and without end are they; and it is within a few years, comparatively speaking, a few thousand years at best, that man has tried to reveal them. The infinite mass remains before us. Therefore the one great lesson that we learn from the Vedas, at the start, is that religion has just begun. The infinite ocean of spiritual truth lies before us to be worked on, to be discovered, to be brought into our lives. The world has seen thousands of prophets, and the world has yet to see millions.  (VI, 9) 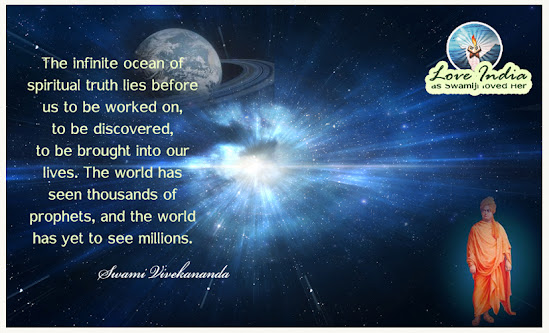 Only recently modern science has come to understand a little bit of the eternality of the cosmos. On the other hand, our great seers, based on their inner knowledge have described cosmos as infinite, indescribable and unexplorable. The secret of the eternal relevance of Indian spirituality is due to the fact that we have always held fast to the Eternal Truth. The great rishis of Upanishads were pointing to this Eternal Truth when they addressed humanity as ‘Children of Immortality’

Knowledge is the Goal

We are slaves in the hands of nature — slaves to a bit of bread, slaves to praise, slaves to blame, slaves to wife, to husband, to child, slaves to everything. Why, I go about all over the world — beg, steal, rob, do anything — to make happy a boy who is, perhaps, hump-backed or ugly-looking. I will do every wicked thing to make him happy. Why? Because I am his father.
And, at the same time, there are millions and millions of boys in this world dying of starvation — boys beautiful in body and in mind. But they are nothing to me. Let them all die. I am apt to kill them all to save this one rascal to whom I have given birth. This is what you call love. Not I. Not I. This is brutality.
When the mind comes to that state of disgust with all the vanities of life, it is called turning away from nature. This is the first step. All desires must be given up — even the desire of getting heaven. 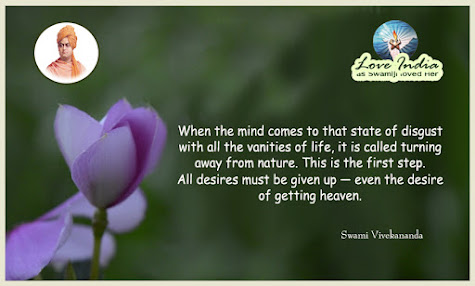 Therefore, all desires of enjoyment in this life, or in a life to come, should be given up. People have a natural desire to enjoy; and when they do not find their selfish enjoyments in this life, they think that after death they will have a lot of enjoyment somewhere else. If these enjoyments do not take us towards knowledge in this life, in this world, how can they bring us knowledge in another life?
Which is the goal of man? Enjoyment knowledge? Certainly not enjoyment. Man is not born to have  pleasure or to suffer pain. Knowledge is the goal. Knowledge is the only pleasure we can have. (IX 219 -221)
at December 28, 2020 No comments:

You cannot make a plant grow in soil unsuited to it. A child teaches itself. But you can help it to go forward in its own way. What you ca...